The birthplace of Giacomo Leopardi.
At the house, inhabited all ‘by his descendants today, you can visit the “Library” of the poet.
We remember the Saturday of the Village Square with the Palazzo Leopardi, the humble home of Silvia, the daughter of the famous romance sung in a coachman, and the steeple of the Church of St. Augustine which is the famous tower and Passero Solitario of the Hill ‘ Infinity is where the first verse of the famous carved song: “Always dear to me was this lonely hill.”

Recanati is located on top of a hill, whose winding ridge is almost level at 296 m above sea level, between the valleys of the rivers and power roller.
The Adriatic Sea, beyond which the air is clear when you see the mountains of former Yugoslavia, is about ten kilometers east of the city.
In the north you can see the Mount Conero is lost in the waters and the other sides, the city is not closed or restricted by the next high, we see the peaks of the Apennines.
The peaks of the Monti Sibillini (Gran Sasso, Majella and Mount Carrier) and more on Mount San Vicino, the Witch and the Catria are clearly visible.
Like other towns in the Marche, also Recanati is the typical “city of balconies” to the broad landscape that we see: towns and villages are scattered in large numbers in the wide expanse, between floors, the valleys and hills. 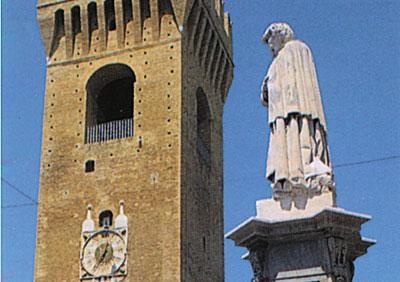