Ancient fortified town between 1454 and 1456, combines history, culture and tradition with its beautiful architecture and landscaping. Dominated by the spectacular fortress, square, houses a permanent exhibition: “Hunters and Warriors of the Stone steel.

The first information we have, when several Germanic nobility shall be granted by the archbishop of Ravenna, the Marche region in the late Middle Ages.
Around the twelfth – fifteenth century its history was common to that of Osimo.
In 1445 it was given a final interference to the city of Ancona behind the behest of Pope Eugenius IV. Under the jurisdiction of Ancona Offagna became one of about twenty castles of Ancona and so between 1454 and 1456 was built the present castle, with the important function of defending the border of the river Aspio.
After 1532, the date that marks the end of the Republic Anconitana, took part in a stable state of the Church, to the unification of Italy.
Despite the few historical surveys of the invoice of the works of some palaces, but also the perfect conservation, is proof that a significant importance. 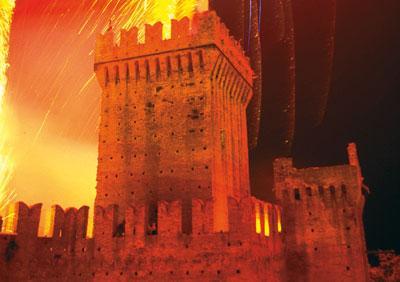